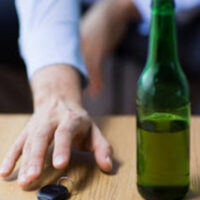 You definitely don’t want to be in The Guinness Book of World Records for blowing the highest BAC ever at a traffic stop. Yet one Florida man may have a claim on that title. He blew a .434 when detained by police. Police said the man had difficulty standing and communicating, which makes sense given his level of intoxication. He was taken directly to the hospital for observation.

In the .3 range, a drinker has alcohol poisoning. By the time you hit .4 you run the risk of respiratory arrest. As a depressant, alcohol works similarly to drugs like opioids and benzodiazepines. It depresses breathing and thus, overdoses occur the same way that heroin overdoses occur. However, it’s much easier to misjudge a dose of heroin than it is to misgauge a dose of alcohol. Most individuals cannot consume enough alcohol to cause respiratory arrest without puking first. But some, who have developed a tolerance, can.

At any rate, regardless of whether or not you can survive a BAC .4 or higher, you cannot drive in that condition. Regardless of his medical issues, the man will face charges of aggravated DUI. Below, we’ll discuss how he might resolve those charges.

Well, they have enough evidence to get him on aggravated DUI but he is not “dead to rights”. In fact, the law could be quite lenient on him if this is his first arrest for DUI and he enters himself into a treatment program for alcoholism. Obviously, it takes a lot of effort before you can get to the point where your bloodstream will tolerate that much booze. So, there’s almost certainly a problem there and this problem can be addressed through treatment.

In other words, the law will look more favorably on someone who is fighting demons and has not yet proven that they’re losing that war. Nonetheless, the defendant will need to prove that he is meeting treatment goals, attending meetings, taking medication as directed, and otherwise maintaining his sobriety.

In a best-case scenario, the defendant may avoid jail time, meet treatment goals, and become a productive member of society. Eventually, he may be able to get his record sealed and not bear the weight of the conviction on his future anymore. So, there is a path toward a normal happy life still left to this defendant. He just needs to prove he’s committed to improving his situation.

Defendants who can meet treatment goals, commit to their programs, and maintain their sobriety tend to face much more lenient consequences than those who ignore the gravity of their situation.

FL DUI Group represents the interests of Orlando residents and visitors who have been charged with DUI while in Orlando. Call our Florida DUI defense lawyers today to schedule an appointment and we can begin preparing your defense immediately.