Can I Get A DUI For Inhaling Air Duster? 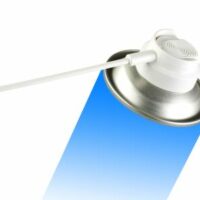 Yes. While not the preferred substance of choice of most drug abusers, air duster can cause intoxication and, in case you’re wondering, it also shows up on a tox screen. Air duster is often sold at computer supply stores and used to clean the insides of electronic components. It can also be used as an intoxicant, although it is quite dangerous to do so.

Unfortunately, people who drive on air duster tend to be very bad at it and often cause accidents. Police will find individuals driving around with empty canisters of air duster on the passenger seats. These individuals will be charged with DUI. Police can also find evidence of air duster use in tox screens.

Huffing and compressed air is among a class of drugs called inhalants by substance abuse experts. It creates a short euphoria as the chemical temporarily cuts the supply of blood to your brain. The same effect can be caused by “the choking game”. The lack of oxygen to your brain can result in brain death, but usually results in a short, pleasurable high.

In some cases, you’ll find people inhaling air duster while they’re driving. These individuals sometimes cause fatal accidents. In that event, it’s a sure thing that they will be charged with DUI manslaughter and serve at least four years in state prison. There are multiple Florida defendants in Florida prisons on charges of causing fatal accidents while high on air duster.

Prosecutors can only convict you with vehicular homicide or DUI manslaughter. They cannot convict you of both. They can charge you with both in the event that they do not have substantial chemical evidence to convict the defendant. In that case, they can present a case that the defendant was high at the time of the accident, but if it doesn’t stick, then they still have a vehicular homicide argument to work with. The vehicular homicide argument does not require the prosecution to prove that the defendant was intoxicated. The jury acquitted the defendant on charges that he was intoxicated at the time of the crash and instead sentenced him for causing deaths while operating his vehicle recklessly. The penalty structure for both crimes is the same. The man faces a recommended sentence of 40 years for the deaths.

FL DUI Group represents the interests of Florida residents who are charged with DUI. Call our Florida DUI lawyers today to schedule an appointment and we can begin preparing your defense immediately.