Florida Man Crashes Into “Drive Sober or Get Pulled Over Sign” 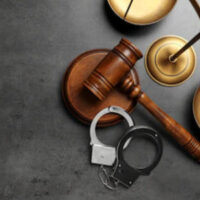 A Florida man, who was driving with a BAC of over twice the legal limit, was arrested after driving into a sign that read, “Drive Sober or Get Pulled Over” according to the police. Bounty Cheramy hit the sign with his blue Mazda on August 30 at around 12:30 a.m. according to police.

Cheramy told police he was talking on his phone when he hit something, but he wasn’t sure what exactly it was that he hit. Deputies said he smelled of alcohol and appeared to be having difficulty standing. After failing a field sobriety test, deputies administered a breathalyzer revealing the Cheramy had a BAC of .161.

Deputies say that the sign was placed on the roadway as part of an anti-drunk-driving initiative, but didn’t expect it to be used in this capacity.

Cheramy is facing charges of DUI with property damage.

In cases where a defendant destroys property while operating a vehicle while unlawfully inebriated, the law imposes enhanced penalties. The same sentences that apply to DUI with property damage also apply to DUI with non-serious injuries.

Under Florida law, DUI with property damage or non-serious injury is a first-degree misdemeanor that is punishable by up to 12 months in county jail. In other words, the penalties in this type of charge are roughly double those as a simple DUI.

In this case, because the defendant took out a sign which was public property, the charge of property damage acts as an aggravating factor. If he hadn’t hit this sign, he would be facing reduced charges.

The problem for police officers who issue roadside sobriety tests is that most people are fairly shaken up after an accident occurs. These tests have no scientific merit and the chances that you’ll fail them are close to 100%.

In other cases, an attorney may be able to get breathalyzer evidence tossed out or otherwise cast doubt on the prosecution’s case.

In this case, since the defendant was caught directly after the accident, and apparently told police everything they needed to know to move forward with a prosecution, there will be less wiggle room to either dismiss or reduce the charges.

If you’re facing charges related to DUI in Orlando, then you need a skilled Florida DUI defense lawyer who can mitigate the damage to your future and your reputation. Call FL DUI Group today to schedule an appointment and learn more about how we can help.

By Matt Olszewski | Posted on November 5, 2020
« What is Accident Report Privilege and How Does it Apply to DUIs in Florida?
Man Says Donald Trump Drove Him to Drink After Crashing Golf Cart »