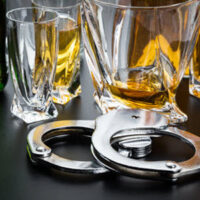 The adventures of Florida Man just keep getting weirder. In our latest installment, 43-year-old Florida Man, Danny Lee Wyatt, said that he was so startled after a train struck his vehicle that he pulled out two bottles of liquor from his trunk and downed them both to settle his nerves. He told officers that he was driving home from the liquor store when his vehicle got stuck on the tracks as a train was coming. Wyatt told officers that he attempted to flag down the engineer, but when he realized the train was not going to stop, he instead vacated the vehicle and ran. But afterwards, understandably shaken by the incident, the man ran back to his vehicle where he imbibed a couple bottles of liquor.

Wyatt left the scene but then went back to discuss the matter with police. He told police the above story and the police noted that he smelled of alcohol but was otherwise cooperative. He then failed a field sobriety test and refused to take a breathalyzer. He was then arrested for DUI and failing to submit to a breath test after his license had been suspended.

Refusing to Submit to a Breath Test

It’s not necessarily a good idea to refuse to submit to a breath test. You will still be charged with DUI and your failure to comply can be used against you in a court of law. It is also a punishable offense. In this case, the man’s defense was already established to the police officers. He said he drank the liquor after the accident. They would have had no way to prove that the man was drunk at the time of the accident and could not have inferred that fact from the fact that he failed a breathalyzer after the test had been submitted. They could have assumed he was drunk at the time of the accident and charged him with DUI and even attempted to make that case before a jury, but they could never have proven beyond a reasonable doubt that the events didn’t unfold exactly the way he said they did.

With that in mind, he will still lose his driver’s license for failing to submit to a breathalyzer test and can face further punishments because he’s been charged with DUI before.

What is the Moral of This Story?

Essentially, this man built himself a solid defense by telling police that he had imbibed the alcohol after the accident as a way to settle his nerves. The police would have had no way of debunking this story and their story that he was drunk when the accident occurred was all speculation. However, he did break the law when he failed to submit to the breathalyzer and now he will face the consequences for that even if his story is true.

The moral of the story is: Know your rights and your obligations under the law.

If the police are accusing you of driving under the influence, the Florida DUI defense attorneys at the FL DUI Group can force them to prove their case beyond a reasonable doubt. Call us today to set up an appointment and we’ll look at the evidence against you and begin planning your defense.