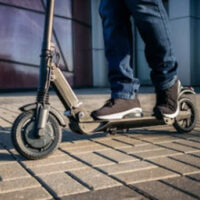 We’ve run a series of articles on all the bizarre instances in which Florida police can arrest you for DUI. This included bicyclists, a man on a segway, and now a former FSU punter who crashed his scooter. Logan Tyler was arrested with a blood-alcohol level of .218 and will now face DUI charges after crashing his scooter trying to turn left on Stadium Drive. Tallahassee officers found him unconscious on the ground with his scooter laying nearby.

According to video surveillance, Tyler passed out while on the scooter causing the crash and made no attempt to break his fall or put his hands in a defensive position. Police were unsure if Tyler had passed out due to extreme inebriation or because of a head injury.

According to police, the punter sustained injuries to his face and around his eyes. Medical professionals had to wait until Tyler was responsive to take a blood sample because the department has a policy of not taking blood from unresponsive patients. The punter was suspended in September for violating team rules.

Scooting While Intoxicated is a Crime

Scooting while intoxicated is a crime. In fact, under Florida law, it is just as bad as driving while intoxicated. While many believe that this policy is ridiculous and over-penalizes those who are more of a risk to themselves than others, the law is written to include any vehicle, including those that don’t require motors to go forward.

There is no shortage of both motor-driven and other vehicles that can trigger a DUI. In 2015, a Florida man was arrested for DUI while operating his motorized wheelchair. It isn’t the greatest law on the books and unfairly penalizes people with the same consequences as operating a car while intoxicated, but having a law on the books makes sense for one reason. People often hurt themselves while operating bicycles, scooters, and other devices under the influence of alcohol. However, they seldom put others at risk when operating these vehicles. For that reason, it makes more sense to separate DUI car incidents from other types of accidents, but that won’t happen any time soon.

The Florida DUI defense attorneys at FL DUI Group have handled numerous cases involving allegedly drunk drivers who were operating all types of vehicles. If you’ve been arrested, call us immediately and we can help build your defense.