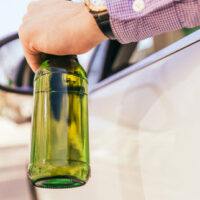 According to an accident reconstruction expert, the police determined (with the help of the woman’s defense attorney) that the accident was unavoidable. In other words, even if she were completely sober, there is no universe in which she could have avoided this accident. However, she was not sober. She was drunk.

In order to prove DUI manslaughter, the prosecution must show that the direct cause of the injury or death was the driver’s inebriation. In this case, the accident would have happened regardless of whether or not the driver was intoxicated. Hence, the most serious charges against the driver were dropped. That included charges of leaving the scene of an accident involving death.

The woman who struck the pedestrian was charged with DUI manslaughter and leaving the scene of the accident. While witnesses say the woman drove off after striking the pedestrian, she returned to the scene later knowing that she had struck something, but wasn’t sure precisely what she struck. Unfortunately for the driver, it was a person. The driver was later found to have been intoxicated at the scene. She was charged with DUI manslaughter.

It is very likely that you will be charged with DUI manslaughter if someone dies and you are drunk inside your car at the time. That does not, however, mean that the prosecutors can prove DUI manslaughter or even get the case past summary dismissal. In this case, the defense hired an accident reconstruction specialist who was able to convince the prosecution that their DUI manslaughter charge was not provable.

Had the woman been convicted on the DUI manslaughter charge, she would have faced a mandatory minimum of 4 years behind bars with a recommended sentence of 10 years and a maximum sentence of 14 years. So, her attorney provided a great deal of value to her defense and was able to get the most serious charges against her dropped. She will now be able to take a plea related to a simple DUI, and she will not face any prison time.

DUI manslaughter charges are difficult to establish, but prosecutors routinely score convictions against defendants because the evidence is there. In this case, the evidence was only apparently there and a strong defense was able to prove the DUI manslaughter charge was without merit. Further, the defendant did return to the scene, so the leaving the scene of an accident charge was also without merit.

Here, a strong defense was the difference between at least 4 years in prison and no prison time at all. Call the Florida DUI defense lawyers at the FL DUI Group today to schedule an appointment and discuss your case.