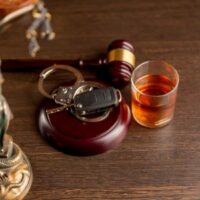 A Florida man driving with three passengers in the vehicle got into a head-on collision with another vehicle coming from the opposite direction. A 27-year-old woman was killed in the ensuing crash. The suspect was driving on the wrong side of the road at the time of the accident. Both he and his passengers were taken to the hospital but survived their injuries. Now, the man is facing a DUI manslaughter charge and could also face one or more counts of DUI causing serious bodily injury.

Officers reported smelling alcohol in the car and finding emptied bottles of alcohol. The driver was taken to the hospital where his blood was drawn. The hospital reported that his BAC was more than three times the legal limit. The sheriff’s department stated that the driver had a “blatant disregard for human life”. In other words, you can expect that prosecutors will be going very hard against this driver for the death of a young woman.

The driver had been initially charged with vehicular manslaughter. However, once the toxicology report came back, the charges were changed to DUI manslaughter. In truth, it would not have mattered if he was drunk or not. Operating his vehicle recklessly resulted in the death of another driver. Had the driver died due to intoxication or reckless driving doesn’t really matter to the police. The penalties for both charges are identical.

In many cases where a death occurs, police will charge both DUI manslaughter and vehicular manslaughter, then wait for the toxicology reports to come back before dropping one of the charges. The state cannot, however, pursue charges related to both criminal statutes at the same time. One of the charges ends up being dropped while the other is pursued.

In this case, had the tox screen come back negative, the driver would have been charged with vehicular manslaughter.

When being drunk doesn’t matter

It’s likely that the driver’s conduct on the road was directly related to his intoxication. However, not every driver who is driving on the wrong side of the road is intoxicated. In some cases, the drivers are distracted, having a party in their car, having sex while driving, or they fell asleep at the wheel. Whatever the reason is, if you’re driving on the wrong side of the road and don’t notice a vehicle coming directly at you, it’s probably because you’re driving recklessly. If you’re driving recklessly and you kill someone, you are guilty of vehicular manslaughter. DUI manslaughter is built on the same law. It only requires that the prosecution establish that you were inebriated at the time of the accident and that the inebriation led to an accident that took a life. Vehicular manslaughter is harder to prove, but driving on the wrong side of the road without noticing a vehicle coming at you is usually going to be enough.

FL DUI Group represents those who have been charged with DUI and related crimes. Call our Florida DUI defense lawyers today to schedule an appointment and we can begin preparing your defense immediately.