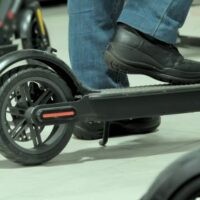 Yes, you can be charged with DUI for operating a motorized scooter while intoxicated. It doesn’t happen often, but when it does, there’s usually a reason for it. In a lot of cases, police will find college students passed out on the side of the road next to a motorized scooter. In other cases, folks can injure themselves or others with motorized scooters if they’re intoxicated. While Florida’s rules may be a little over-reaching, there is good reason to criminalize operating a scooter while intoxicated. In this case, a man destroyed some Walmart shelves after he failed to control his scooter properly while in Walmart. Why Walmart employees were allowing the man to operate the scooter inside the store remains a mystery. However, had he injured someone else and not their shelves, they could have been sued for permitting the behavior.

At any rate, the man was buzzing through Walmart with an open bottle of Smirnoff vodka hanging out of the back of his bag. Police said the man was swaying into shelves and nearly hit another customer. The scooter driver refused to cooperate with police, so police escorted him to an ambulance in a stretcher. He then refused a breathalyzer test. The man has been charged with DUI, refusal to submit a breath sample with a prior arrest, disorderly intoxication, and possession of an open container of alcohol.

Implied consent and your scooter DUI

The law is written in a specific way in Florida that allows police to conduct traffic-related stops and impose traffic-related sanctions for operating non-commuter vehicles. So when someone asks this guy where he got his DUI, he can tell them he got it inside of Walmart. However, it’s a bit of an awkward fit. Informed consent relies on the privilege of driving in Florida and the ability to retain a driver’s license. You don’t need a driver’s license to operate a scooter in Florida.

So, if you refuse a breath test for a scooter DUI, you can end up having your license suspended for 1 year. What happens if you don’t have a license? Well, the law retains a record of the incident and the refusal and it can be used against you later. If you do have a license, you will have your license suspended, may incur fines, and your auto insurance company may use the incident as a pretense to drive up your insurance costs considerably.

Essentially, the fact that you don’t have a driver’s license doesn’t mean that you won’t face penalties related to refusing to consent to a chemical test.

Scooter DUIs are on the rise

Police don’t go out of their way to arrest people who are operating scooters. If you look like you’re handling the scooter properly, they generally leave you alone. That being said, if you crash into someone, hurt yourself, or knock some product off the shelves at Walmart, they will take a special interest in what you’re doing.

Arrested for DUI? Call the Florida DUI defense lawyers at FL DUI Group today and we can begin preparing your defense immediately.